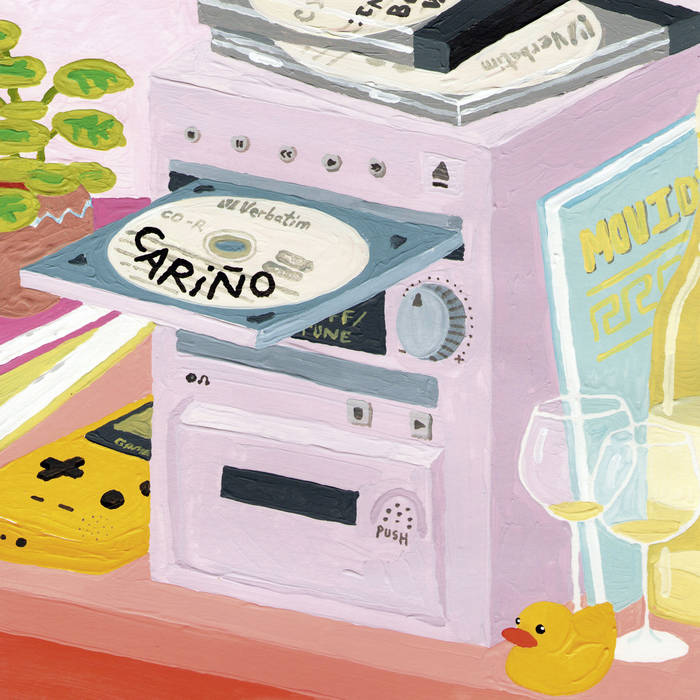 This is what they call love at first sight. The instant we heard the two songs that made up what in the end was the introductory Single by this trio from Madrid, we knew right away that a fruitful relationship was just beginning and that we were going to be totally won over by their songs. And they haven’t taken long at all to give us new fruit. “Movidas” is a numbered, (500 copy) numbered-limited-edition, pink-vinyl 10” Mini-LP that, obviously, is being included on our “New Adventures In Pop” collection, dedicated to pop music’s new names and emerging groups. CARIÑO are freshness, ease, and unstoppable fun. Somewhere between LOS ROMEOS and HELEN LOVE, between PAPA TOPO at their most punk and AEROLÍNEAS FEDERALES. It’s impossible to hold back your smile.

Because their songs overflow with cynicism, with craziness, with the unexpected flourish, but at the same time with naturalness, with awakening, with the most innocent feelings. That’s why, after hearing María, Paola and Alicia’s songs, you have the feeling that what lies beneath is an instantaneous, urgent and immediate need to shout out the love they feel in a way that no one else has ever done before: simply and straightforwardly, with its whole brutal spirit and hazy feelings, with all its sweetness and bitterness. The pristine, adolescent honesty of “Canción De Pop De Amor”; the sharply hilarious irony of “Bisexual”; the disproportionate innocence of “Todos Los Días”; the anger full of amazing rhymes of “Su Portal”; the uncontained vitriol and the punk spirit of “Mierda Seca”; the enchanting frivolousness of “Momento Inadecuado”; the impossible and terribly fun occurrence of “Souvenirs”; the wicked-tongued existential emptiness of “Nada Sigue Igual”.

With this new release, in record time, CARIÑO has managed to perfect what they do, maintaining their immediacy intact. And like George Martin, the fifth Beatle, we have Martín Spangle in the shadows, as the fourth member of CARIÑO, essential for everything to take shape, putting those melodies in perfect order, recording, mixing and producing with all his love.

This is an album that sometimes inevitably moves us to the eighties, but they are so contemporary and modern, with those always excellent melodies, that break down even the most pleasant and innocent emotions. CARIÑO are LOVE.